Mr. Steam and “The train is our friend”: an interactive system to welcome school children to the Museum


“The train is our friend” consists of an innovative and interactive system to welcome school children to the National Railway Museum in Portugal. An interactive wireless avatar, Mr. Steam, a 3D virtual character, narrates a story and interacts with the school children following the themes of time, travel and space, using the history of trains from the age of steam locomotives to the present day. Visitors interact by means of a wireless video controller. The video was made in two languages (Portuguese and English) and subtitles can be used for accessibility. The avatar has a camcorder that alows another interaction with printed cards bearing symbols, called "magic cards." Children can see different trains in 3D models as if they were in their hands. They can join carriages with the locomotives and make them move, they can understand the different speeds of the trains like a TGV (Hight Velocity Train) or a diesel locomotive, or see the inside of a carriage. This project was made possible through the co-finance program, START-Seamless Travel across the Atlantic area Regions using sustainable Transport.

Learning, outreaching and communicating the Heritage of the railway and raising the awareness of our future sustainability is the core of the present project. Now, more than ever, we need to foster new generations’ awareness of Heritage preservation, linking it with their daily experiences.

“The train is our friend” is based on the premise that attitudes towards Heritage protection, environment, mobility and the use of public transportation are deeply influenced by the knowledge and examples learned in childhood.

The main objective is to deliver an innovative way of welcoming school children to the National Railway Museum. This welcome service is at the same time funny and educational, as it welcomes school children and teachers, presenting the museum and also talking about traveling and the evolution of human mobility. The message also includes the need to use sustainable transportation facilities in order to look after the global environment.

In the implementation of this project, our first step was to develop a script with guidelines that follow school curricula, promoting the knowledge and exploitation of the history of human travel and transportation together with the preservation of cultural heritage. In this aim, the Learning Service of the National Railway Museum worked together with teachers and children to assure that the message was aligned with school curricula and that the concepts and language were appropriated to children’s age and comprehension levels.

After this phase, we developed a character with attributes that would convey knowledge and understanding, and that also would attract children in terms of its visual and graphic look. There is always the risk in such a project of adults choosing characters in which children may not recognise themselves. To avoid this, the Learning Service Team conducted focus groups with children from schools in Entroncamento to test their reaction to Mr. Steam. The children loved him. Afterwards, it was necessary to develop all the dialogues (both in Portuguese and English languages) and also to conduct several tests of the technology. 3D technologies and augmented reality are still very new in their application in the cultural sector, particularly in museums. The museum’s team with the contractors developed a win-win relationship in developing a technological solution that best served the Museum’s key messages. 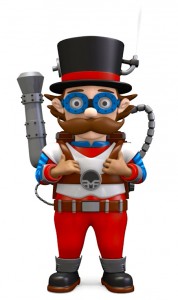 As soon as the interactive wireless game was in place, the Learning Service Team organized a new focus group to test the solution both with children and teachers. This was a very interesting learning process for everyone. From the outcomes of this final focus group, we made some changes both in the narrative and the graphic design.

The final result is now in place. An interactive wireless game designed for a multimedia kiosk with a large format display allows the viewing of movies and interaction connected to a camcorder. This equipment enables the Museum to provide interactive 3D content: a video application in the form of a virtual reality application with an interactive learning game allowing the youngest visitors to have contact with the museum collection and its history.

This equipment was concepted for an innovative solution designed for a multi-media kiosk with a large format display LCD screen with 42”. It is used for the visualization of movies, has a wireless game command center and a camcorder for the aumented reality. This equipment can be moved and replaced if necessary. 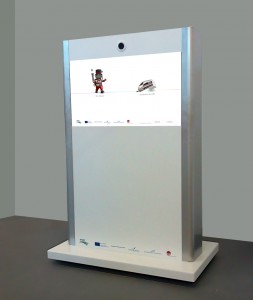 A video application allows younger visitors to have contact with the museum collection and its history. Mr. Steam narrates the history of travelling, from the first machines built by humans to the present. He interacts with the school children following the themes of time, travel and space, using the history of trains from the age of steam locomotives to the present day. The main objective of this narrative is to raise children’s awareness and sensitivity to industrial heritage, mainly railway heritage, and the need for its preservation and conservation. Joining the past with present and future times, Mr. Steam promotes the use of the train as the children´s transportation on their daily commute to school, whenever possible, thus avoiding the use of private cars and linking heritage preservation, mobility and the environment. 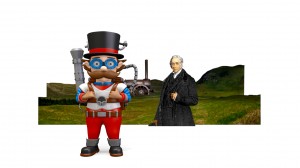 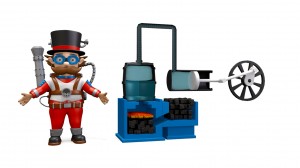 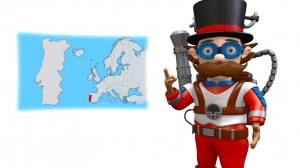 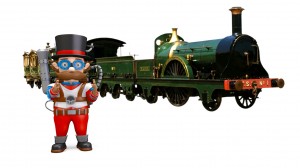 Figure 6 – Local Railway heritage is part of the video content 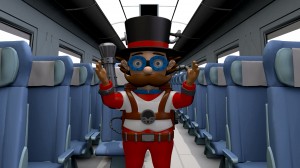 Our main goal is raising children’s awareness of the meaning of heritage preservation and the value of cultural heritage today. The cultural heritage field is gaining considerable significance, since it reflects the multitude of identities that make Europe unique in its diversity. This premise made it possible to develop this project under a European Cooperation Project that worked mostly within the areas of transports, quality of transport information, etc. 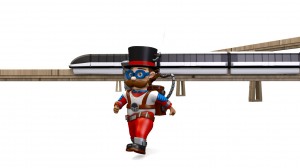 Figure 8 – Mr Steam talks about the future of trains

The approach of the project, “The Train is our Friend,” is easily replicable in different countries and also for different technologies. It also presents good content, is accessible, easy to understand and serves as an example of best practice among European Museums and Heritage sites in targetting school children.

This video can be played with no automatic stops and it is possible to include subtitles in English and Portuguese.

The Totem has an aplication that uses the most recent technologies such as 3D modelling and augmented reality. With a camcorder, this Totem alows another interaction: the children can hold printed cards containing different symbols, the “magic cards,” and see different trains as 3D models as if they were in their hands. They can hitch the locomotives with their carriages and make them start moving. They can understand the different speeds of trains like a TGV (Hight Velocity Train) or a diesel locomotive. The models also illustrate the differences between new trains like Magleve and the high velocity trains like the European TGV. They can control the motion of each train and even explore the inside of carriages.This interaction turns to be an unforgettable experience for children. 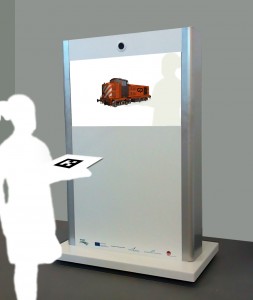 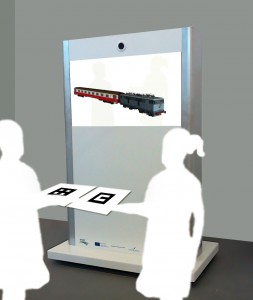 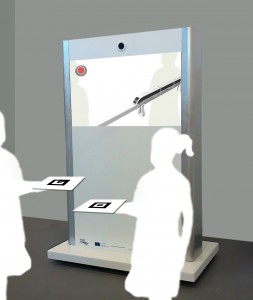 This Totem is entertaining and fun; it is interactive and enables children to play. The project was made possible under the co-fiance program, START-Seamless Travel across the Atlantic area Regions using sustainable Transport.

The team of people necessary to move the project forward consists of museum decision makers, content providers, IT support, and the core production team. The production team consists of people that design and develop the Totem, project managers, and software developers provided by Sistemas do Futuro, Lda. (http://www.sistemasfuturo.pt)
Mr. Steam was illustrated by João Angélico and the 3D modeling was done by José Ricardo Silva.

Work is in progress for the promotion and advertising of the project to schools. In the first phase, we will address schools from Entroncamento and its boarder municipalities. This is planned to be undertaken through April 2013. After this date the project will be advertised nationally through a promotion plan that invites the entire community of elementary schools  to participate in workshops that begin with a welcome from Mr. Steam, a visit to the museum, and work and games about heritage protection and promotion based on the theme, “the train as an environmentally-friendly form of transportation.”

Our project will be continuously updated in terms of contents and images as necessary to maintain a modern and relevant message. The youngest target audience is receptive to new trends and innovation, which are essential to providing content that meet their tastes.
The feedback received from the school community about “The train is our friend” and Mr. Steam has been excellent, showing a great appreciation of the displayed range, level and content. The future of this project lies in the effort to engage schools all over the country and in the level of interest on the part of schools and teachers to join us in developing further activities based on our current achievements.

Cost of implementation of the project

Mr. Steam and Friends cost $82,922 (VAT included). This cost derives from the hardware, software development and graphic design costs. Approximately $9,509 was allocated for human resources in the project conception, development and execution. This means that the total investment costs are $92.4333 with cofinancing of 65% by the European Commission’s Transnational Territorial Cooperation Programme. The remaining amount (35%) was supported by the National Railway Museum Foundation’s own budget.

We would like to express our gratitude to the Fundação Museu Nacional Ferroviário Armando Ginestal Machado (http://www.fmnf.pt) The National Railway Museum Foundation developed this awareness-raising project under START-Seamless Travel across the Atlantic area Regions using sustainable Transport (http://www.start-project.eu). START is implemented within the European Commission’s Transnational Territorial Cooperation Programme and we are thankful to them for all their suport.

Cite as:
M. Teixeira, M. van Zeller Sousa and . , Mr. Steam and “The train is our friend”: an interactive system to welcome school children to the Museum. In Museums and the Web 2013, N. Proctor & R. Cherry (eds). Silver Spring, MD: Museums and the Web. Published January 31, 2013. Consulted .
https://mw2013.museumsandtheweb.com/paper/mr-steam-and-the-train-is-our-friend-an-interactive-system-for-welcome-school-children-at-the-museum/