In 2011/12 the Museum of Contemporary Art Australia (MCA) underwent a AUD$53 million redevelopment. The building works included the refurbishment of all galleries and offices, the addition of a new 5-story wing and two new rooftop venues. At the same time as the physical building was closed for redevelopment, from August 2011 to March 2012, the Museum's digital infrastructure was also being refurbished and, in many cases, replaced.

The MCA took this opportunity to look at its systems for ticketing, store point-of-sale, customer relationship management, membership, donations and the MCA website. The Museum also sought to add online ticketing, online membership, online donations, an online store and a museum-wide WiFi network.

This paper and talk outlines how we created an entirely new eCommerce framework using web APIs to connect open systems for ticketing, store, philanthropy and membership. It argues that in many cases, and especially for under-resourced cultural institutions, a selection of loosely coupled best-of-breed systems (preferably via open APIs) is preferable to attempting to build or buy an "all in one" solution. Further, the talk will discuss how this approach can be extended and applied in other institutional contexts.

In 2011/12 the Museum of Contemporary Art Australia (MCA) underwent a AUD$53 million redevelopment. The building works included the refurbishment of all galleries and offices, the addition of a new 5-story wing and two new rooftop venues. While the physical building was closed for redevelopment, from August 2011 to March 2012, the Museum’s digital systems were also being refurbished and, in many cases, totally replaced.

The MCA took this opportunity to look at its digital systems in a holistic manner. These included suppliers and technologies used for ticketing, store point-of-sale, customer relationship management (CRM), membership and donations, as well as the MCA website (http://www.mca.com.au). In parallel to this review, the Museum sought to integrate certain web based systems with a new museum-wide wireless network, new digital interpretation smartphone app and new internal IT infrastructure.

This paper outlines how an entirely new eCommerce framework was built using open web APIs to connect systems for ticketing, store, philanthropy, membership, CRM and the WiFi network. In this solution a selection of loosely coupled best-of-breed systems – connected via open APIs – was attempted instead of an all-in-one solution or an in-house build. I will describe the approach taken, the challenges faced and lessons learned.

In 2011 the MCA’s website turned 6 years old, which made it older than both Twitter and the iPhone. Web technology had progressed considerably since 2005, as had the visual identity of the Museum, so it made sense to rebuilt rather than refresh the website. At the time, the MCA had no online store to support its successful onsite store. There was no online membership and limited facilities for online donations. The Museum is free to attend, however there was no online ticketing for public programs. At the time Raiser’s Edge from Blackbaud was used as a CRM for donors, members and partners (https://www.blackbaud.com/fundraising-crm/raisers-edge-donor-management), however this required a series of manual steps to create each new member and membership data could not be connected to any other system without further manual steps. 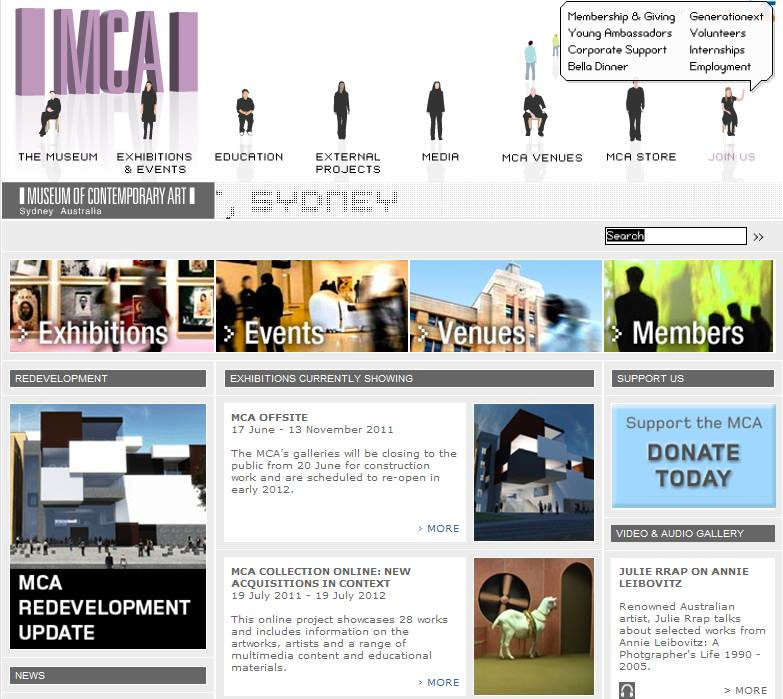 The MCA engaged the Interaction Consortium (http://interaction.net.au/) to build the new website and began looking for an eCommerce solution that could support a set of needs that are very common in cultural organisations:

The Interaction Consortium was selected for the project, in large part, because they would be utilising and improving upon the GLAMkit web toolkit that has been especially designed for the galleries, libraries, archives and museums sector (http://glamkit.org/). Further, they committed to making the resultant code available as an open source project, an initiative that the MCA strongly supports.

A number of Australian, European and North American “all in one” solutions were investigated, however none that were available in the Australian market met the MCA’s modest requirements at a reasonable cost. A different approach was required.

There are a wide variety of solutions to each of these individual requirements. Using membership support and integration as a crucible through which each potential provider was viewed, all systems that did not have an open API, or who were unwilling to open up APIs they did have, were struck off the list. Only systems that could communicate with others made the cut. This immediately removed Raiser’s Edge and the store’s incumbent point-of-sale system from the planning process.

The key membership technology we selected was eTapestry. eTapestry was chosen because it has a stable, documented and open API for adding and altering constituent records, as well as a query language that is available via the API. This means that we are able to retrieve a list of active members, or to get a list of new members, which can be used to notify other providers. Further, if memberships were created by other providers we would be able to add them to the master database. As eTapestry is a web-based system, it easy for it to supply membership signup and various donation pages in the visual style of the MCA’s main website (https://app.etapestry.com/bbphosted/nl_mca/MembershipForm.html).

We selected a New Zealand based eStore and in-store point-of-sale solution from Circle Software (http://www.circlesoft.net/) to run the MCA Store (http://store.mca.com.au/). Circle Software was selected because they could integrate with our system and their point of sale software was intuitive and mature.

The Australian online and onsite ticketing company Oztix (http://oztix.com.au) was chosen as their venue ticket scanning technology can scan MCA issued tickets, MCA membership cards and tickets issued by other providers. Also Oztix commited to implement a bespoke two-way membership integration and to expose the event API to the MCA’s GLAMkit CMS (https://tickets.mca.com.au/). This API was used to integrate the MCA’s event listing with the Oztix event ticket pages. MCA staff can create an event in the GLAMkit CMS just once, specifying single or multiple occurrences, price, capacity and other parameters. They can then choose to send that event to Oztix and that event will be created by the API. MCA public programs staff can decide when they’re ready to make it available for sale using the Oztix CMS. The API constantly monitors Oztix event listing RSS for new MCA events and automatically links the two events when it’s made active.

We were able to achieve the initial goal of a group of integrated systems that passed key user data between them across multiple axes. It’s also important that certain data can originate in different places. For example, someone booking tickets to an event or a workshop can buy a membership and book membership price tickets in the same transaction. The ticketing system inserts a new membership into eTapestry, the Philanthropy and Membership team is notified and sends out a membership pack and GLAMkit picks up the new membership and creates a member’s account in the eStore. Within 15 minutes of a new membership being purchased online, all providers have been notified and the new member has been emailed their store and ticketing login credentials.

This approach was used throughout the build process for the main MCA website and was very successful. The user stories for the website were generated at the end of a series of workshops, UX sessions and one-on-one interviews. In addition, I undertook a series of interviews with members of the Store, Marketing, Philanthropy/Development, IT, Public Programs and Finance departments to understand their ecommerce needs and dependencies. In collaboration with Interaction Consortium, the MCA crafted user stories in the style; “as a user, I can buy a membership online and then access membership events and membership discounts for tickets, on the eStore and at the MCA Store within an hour”.

I used these stories as a way of judging potential vendors. The vendor selection process took a period of months, as the different options were tested and contracts negotiated. Interaction Consortium, Circle Software and Oztix were all happy with a user story approach to the integration of their systems.

The loosely-coupled approach means that any of the system, with varying degrees of difficulty, can be unbolted and a new provider bolted on without affecting the other systems or the overall user experience. This is especially important in the often cash strapped museum sector.

We decided early on that Oztix would host the online ticket outlet and that Circle Software would host the eStore, such that they could manage upgrades and meet uptime SLAs. To make the transition clear to the user, we devised a different header and background treatment for the affiliate sites. 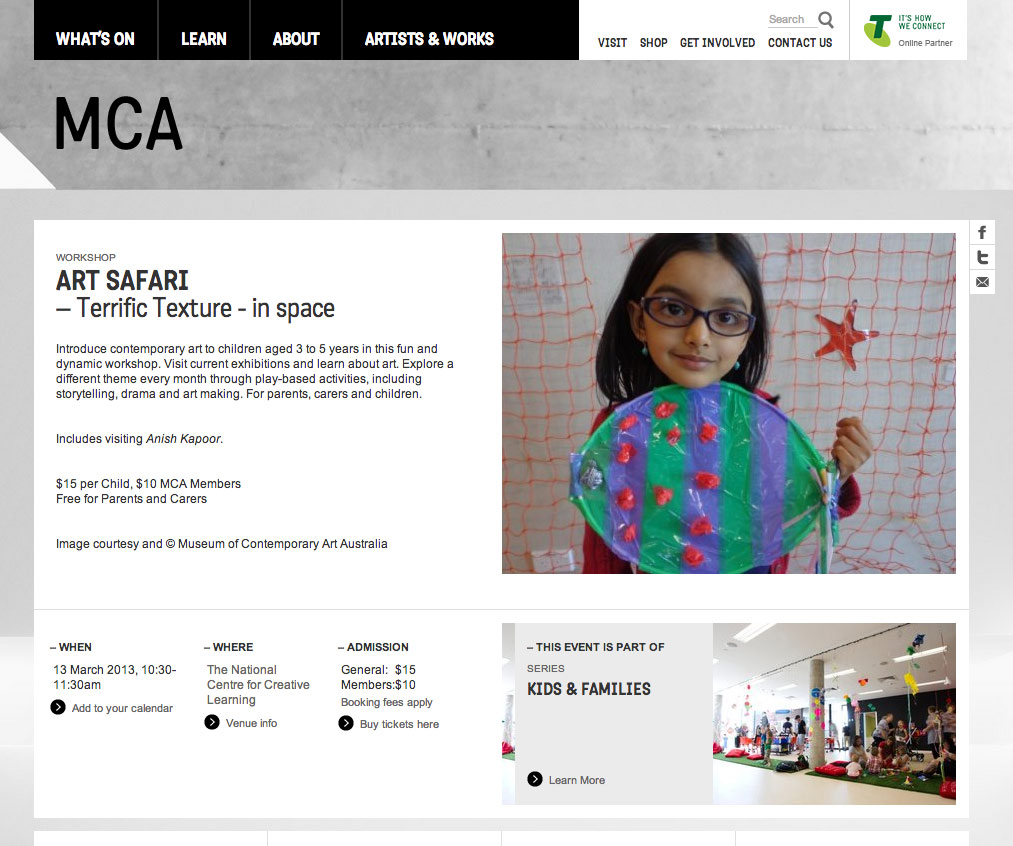 When a user clicks “Buy tickets here” they are taken to page with the same font and the same visual style, however the background changes from an image from within the MCA to a stylised composite image, the header changes to one that offers a “back to the MCA” link in place of the normal page header and MCA Tickets page branding is added. 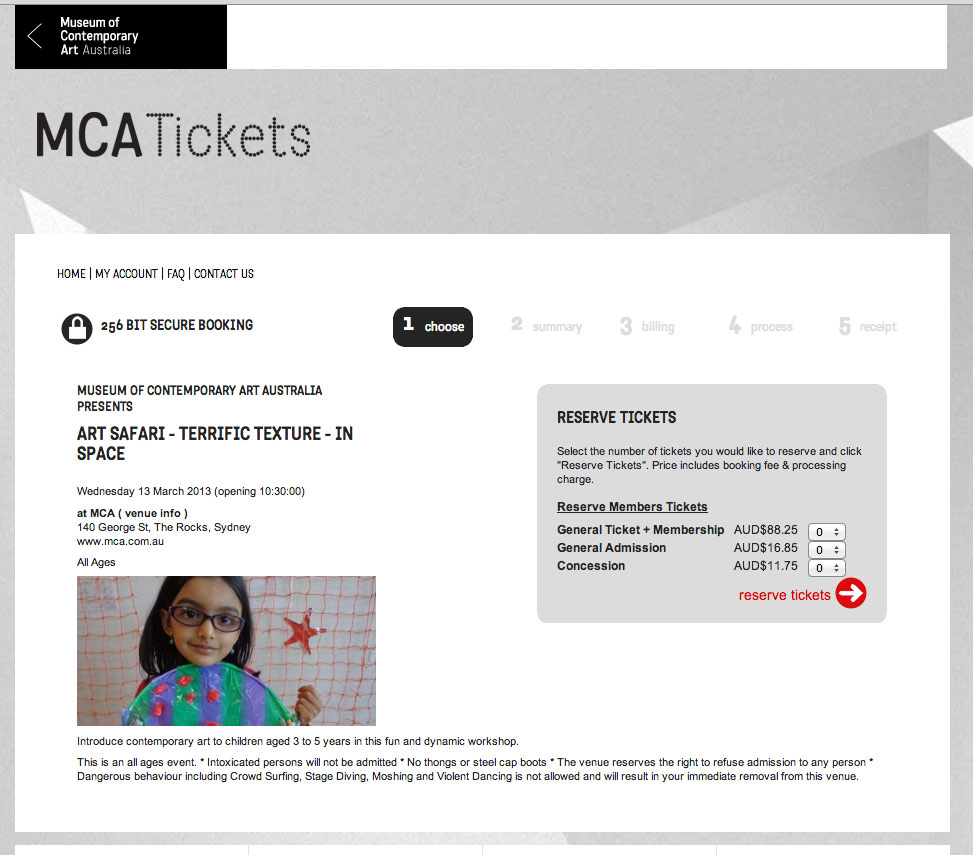 Due to the refurbishment of the Museum of Contemporary Art the MCA Store was closed and the Museum was not actively promoting membership. This made it easier to convince the Store and Philanthropy departments to embrace the changes that affected them directly. Despite this, there were still significant challenges.

Wholesale changes, such as the ones described here, can be difficult to negotiate in an institution with established departments, occasionally with competing goals. Although this exact model isn’t appropriate in all circumstances, or for all institutions, here are few key lessons that we learnt during this project. These should act as reference points for other individuals and institutions with the same objectives.

Further integration possibilities remain, for example we would like to record every ticket and store purchase members and donors make against their eTapestry account to help us better understand and serve their interests.

We would like to provide tools and support for smaller institutions who are struggling with out-dated or dysfunctional eCommerce solutions. This paper is part of that process, as is the open source approach to GLAMkit taken by Interaction Consortium. The MCA website forms part of the core part of the initial version of the GLAMkit CMS.

In January 2013, with the support and encouragement of the Museum of Contemporary Art Australia, we’ll release the code for www.mca.com.au – minus the MCA-specific parts – as version 0.1 of the free, open-source GLAMkit CMS, for anyone to install, use, or contribute to.