Nancy Proctor is Chief Strategy Officer and founding Executive Director of the Peale, a center for Baltimore stories and studies and laboratory for cultural innovation based in the historic Peale Museum building. Previously, Nancy was Deputy Director of Digital Experience and Communications at the Baltimore Museum of Art (2014-2016), Head of Mobile Strategy and Initiatives at the Smithsonian Institution (2010-2014), and Head of New Media Initiatives at the Smithsonian's American Art Museum (2008-2010). With a PhD in American art history and a background in filmmaking, curation and feminist theory and criticism in the arts, Nancy lectures and publishes widely on technology and innovation in museums, in French and Italian as well as English. She edited Mobile Apps for Museums: The AAM Guide to Planning and Strategy in 2010, and coordinated the publication of Inclusive Digital Interactives: Best Practices + Research for MuseWeb with Access Smithsonian and the Institute for Human Centered Design in 2020. Nancy served as Co-chair of the international MuseWeb (formerly Museums and the Web) Conferences with Rich Cherry, and edited its annual proceedings from 2012-2020. Nancy created her first online exhibition in 1995 and went on to publish the New Art CD-ROM and website of contemporary art – a first in the UK – in 1996. She co-founded TheGalleryChannel.com in 1998 with Titus Bicknell to present virtual tours of innovative exhibitions alongside comprehensive global museum and gallery listings. TheGalleryChannel was later acquired by Antenna Audio, where Nancy led New Product Development from 2000-2008, introducing the company’s multimedia, sign language, downloadable, podcast and cellphone tours. She also directed Antenna’s sales in France from 2006-2007, and was part of the Travel Channel’s product development team 2007-2008. As program chair Nancy led the development of the Museums Computer Network (MCN) conference programs 2010-2011, and co-organized the Tate Handheld conference 2008 & 2010 with Jane Burton. She started the MuseumMobile wiki and podcast series in 2008, was Digital Editor of Curator: The Museum Journal from 2009-2014, and is now on the Journal's editorial board, as well as on the Board of Directors of the Omnimuseum Project.

Tips from oldies and newbies to Museums and the Web; add yours in the comments below!

Networking: The people you get to know are arguably the greatest value of attending Museums and the Web. Here are some tips for building your personal network at MW:

Professional Development: In addition to the network you’ll develop, here are some of the key professional development opportunities at MW:

Logistics: Got a how-to question about the conference? We try to answer them all on the MW2013 website:

Please add to these tips and help us answer other questions in the comments below! 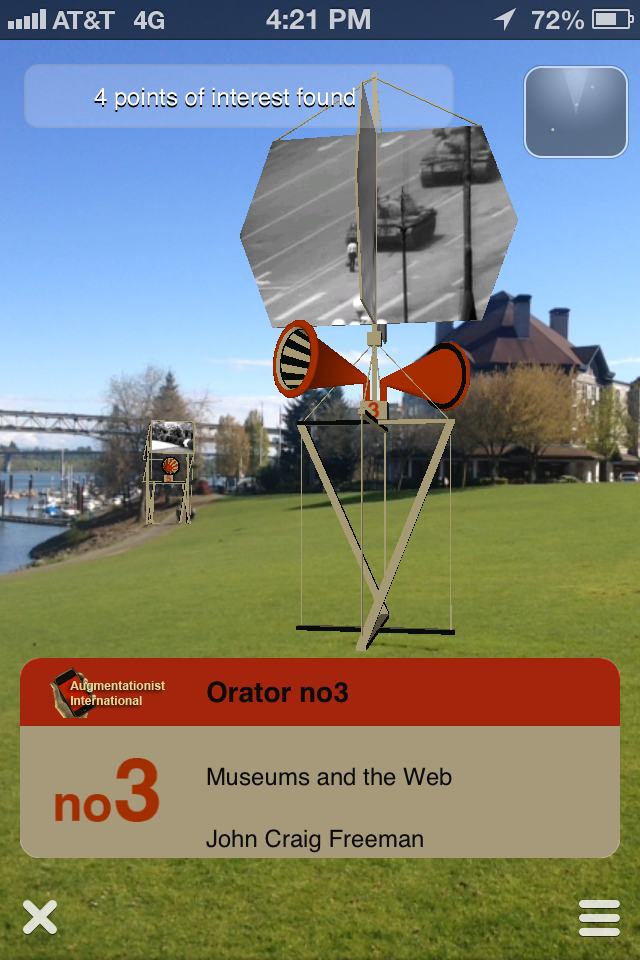 As part of this year’s conference, we are excited to introduce a new media exhibition component into the program.

In the spirit the “hypermedia installations” curated by Xavier Perrot that were features of earlier ICHIM events, MWX2013 presents a “prototype” exhibit focusing upon Augmented Reality. Museums and the Web‘s exhibition initiative is curated by Vince Dziekan, and our inaugural exhibition features works by John Craig Freeman, Future of Reality and Will Pappenheimer that emphasise how the innovative potentials of AR can be used for tactical intervention.

In recent years, thanks in large part to increased accessibility to the technology through proprietary and end-to-end services (such as Layar, Aurasma, Junaio), AR has become one of the most interesting areas of development in the “musetech” landscape. Today, the breadth of possible applications of augmented reality content in museum interpretation is represented by innovative projects spanning cultural heritage (such as the Pure Land augmented reality edition produced as part of the Digital Dunhuong project) and audience engagement strategy (the Site app produced by the Museum of Contemporary Art, Sydney is just one example for amongst many). However, while the conception of augmented reality can be traced back to Adolfo Bioy Casares’ novel, La Invención de Morel (1940), artistic precursors of AR go back to the early mediated interfaces produced by Jeffrey Shaw (most illustratively Golden Calf, 1994) and the mixed reality environments created by Raphael Lozano-Hemmer (Body Movies, 2001). 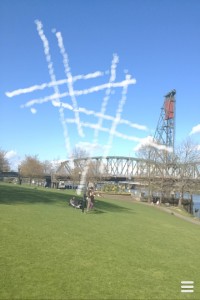 The curatorial strategy for MWX2013 adopts an “interventionist” approach, inspired by how the work of these contemporary new media artists harnesses the potential of AR to create artworks with a deceptively playful, yet critical edge. The resulting exhibition is “blended” into the main program of MW2013 in Portland in a manner that we hope will both surprise and engage delegates.

Support for this project is acknowledged from the Australia Council’s Visual Arts Board, along with other institutional and contributing partners.

The target audience of the sessions are all MW2013 presenters and session chairs, with a particular focus on first-time-presenters.

The sessions are 60 minutes long, and include:

Hosting for the sessions was kindly provided by JHU Museum Studies Program.

You can also sign up for the pre-conference workshop, “Developing Short Form Video Elevator Pitches” led by Ryan Donahue on Wed 17 April. MW2013 speakers get their fee for this workshop refunded as a $175 hotel room credit.